We have some extremely exciting news for State of Origin Game II. Joining us live on the main stage at The Waves is internationally celebrated Comedian and Sports Celebrity Manager, Justin Karcher.

Justin is heading off on his 'Big Lap Comedy Tour' and is stopping in at The Waves for Game II along the way. He’ll talk and share comedic anecdotes about touring with sporting celebrities such as Sir Vivian Richards, Muhammad Ali, Arthur Beetson, Tommy Raudonikis, Joe Bugner, Ron Barassi and many others.

There will also be some fantastic giveaways during the night including 3 QLD State Jerseys and a memorabilia auction of a signed 'Birth of Origin Born 1980' print signed by first State of Origin Captains - Arthur Beetson & Tommy Raudonikis. 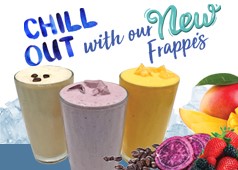 For a limited time only Sticky Fingers Cafe is offering five delicious flavours of Summertime Frappes!